Household Tip: How to prevent mould

Mould is an issue that affects almost 1 in 3 Australian homes. Not only can it cause damage to your property, but in serious cases, it can also affect your health. Although some moulds can be recognised through sight or smell, others can go undetected. Because of these risks, we have reached out to mould experts  ‘The Mould Doctor’, who have provided us with some useful information on what mould is, what causes it to spread, and how it can be prevented.

Moulds are a naturally occurring fungus whose role in the ecosystem is to decompose of dead organic materials. When mould colonies grow large enough, they can become visible on the surface, usually appearing in various colours. It is important to understand that the colour of mould is determined by its age and food source, not by the type of mould. Because mould spores and fibres are so minute, it is virtually impossible to determine the type of mould from the naked eye. Some of the most common types of mould include:  Alternaria, Aspergillus, Cladosporium and Penicillium. 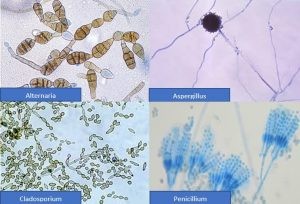 WHAT CAUSES MOULD TO SPREAD?

The main ingredient in the growth of mould is water. In the simplest of terms no water = no mould. However, like any other living organism, it also needs food, oxygen and ideally a warm temperature to grow.
As previously stated, moulds main food source is dead ORGANIC materials, such as wood, paper, dirt and hair fibres. Some moulds can also digest some synthetic materials such as adhesives, pastes and paints. Mould CANNOT grow on inorganic materials such as concrete, glass and metal, however, if these surfaces contain any traces of organic materials, then mould will be able to form. Although mould prefers wet or damp materials, it can get most of its moisture from high humidity, typically above 60%.

Once mould is present there are 2 ways in which it can spread:

KEY TIP: If you have visible mould growth occurring from a water intrusion, DO NOT dry it. As the moisture of the mould or building material decreases, the release of spores increases exponentially.

HOW TO PREVENT MOULD:

Remember: mould will ALWAYS need moisture/water to grow. Therefore, the key to preventing the growth of mould is to reduce the amount of water that accumulates in a building’s structure. This can be done by:

Helpful Hint: bathrooms, laundry’s and kitchens are generally exposed to the highest amounts of moisture, making them higher-risk areas for mould. You should check these rooms regularly for any signs of mould.

2. Pay attend to indoor humidity: it is recommended that indoor humidity levels remain between 30-60%. This can be monitored through moisture metres, which are available for purchase from most hardware stores. People living in smaller residencies are highly encouraged to purchase such a device, as they tend to exhibit higher humidity levels. For those not wanting to purchase a moisture metre, you can recognise excessive humidity levels by paying attention to these signs: condensation on windows and walls, foggy glass or metals, a ‘wet’ smell or rotting wood. If any of these signs are present, you should inspect for mould immediately.

4. Keep roof gutters clean: you should regularly monitor the cleanliness and condition of your roof gutters. If any damage has occurred, it should be rectified immediately. It is also important to check for any water stains on a roof, as they can indicate any leaks.

5. Increase air flow: if air is inadequately circulating through your home then excess moisture can appear. To improve air flow, you should open doors between rooms, keep furniture away from walls, and let fresh air in through cracked windows and/or doors.

6. Monitor indoor plants: The moisture in soil provides the perfect breeding ground for mould to spread. To ensure your household plants don’t begin to breed mould you should keep the soil clean, ensure they are exposed to adequate sunlight and make sure you do not over water them.

The most important thing to remember is that mould is a lot easier to prevent than it is too treat. For any more information follow the link below:

Back to all news
Up to Date